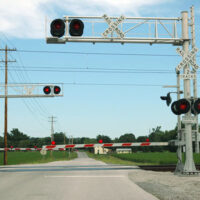 Since train and railroad accidents are not as common as other transportation accidents such as auto collision or bus crashes, Floridians do not view them as a serious threat.

While railroads may not be as popular as they were back in the day, millions of commuters still use subways, commuter trains, trams, and other trains to commute to and from work and travel to various destinations in the U.S. and aboard.

According to Statista, passengers traveled more than 27.6 billion kilometers on railways in North and South America in 2018. The U.S. railway system is comprised of more than 600 railroads and hundreds of thousands of miles of tracks.

How Common Are Train & Railroad Accidents in the U.S.?

But train accidents do happen from time to time despite the fact that they are rare. There are approximately 1,800 train and railroad accidents each year in the U.S., according to the Bureau of Transportation Statistics. And when these accidents do happen, they often result in injuries and deaths.

When accidents involving trains and railroads happen, obtaining any amount of compensation can be more complicated than in other types of transportation accidents. That is why you should consult a West Palm Beach train and railroad accident attorney to discuss your legal options.

A person was hit by a train in West Palm Beach when crossing the tracks. As reported by the Palm Beach Post, the gates were down at the time of the fatal train accident. The victim, identified as a 55-year-old male, was hit by a Brightline train while crossing over the Florida East Coast Railway track at Nottingham Boulevard.

The fatal accident occurred at around 6:30 p.m. on Friday. There is no immediately details regarding why the man was on the tracks. Brightline launched in 2017 and is currently rebranding as Virgin Trains USA. Since its launch date, more than 40 people have been fatally hit by Brightline trains.

The rate of fatal railroad accidents involving Brightline trains, which is one person every 28,000 miles, is the highest among the nation’s more than 820 railroads. This was a conclusion by The Associated Press. The company is cooperating with suicide prevention groups and has plans to install infrared motion detectors and drones to patrol its tracks to prevent railway suicides.

A large number of train accidents occur at crossings when vehicles try to “beat” the train. In these crashes, not only the driver and his/her passengers can be harmed, but also unsuspecting passersby and train passengers.

Causes of railroad accidents can involve:

Liability in a train accident will depend on the cause and facts surrounding the case. Railroad companies and operators of trains have a duty to maintain the highest level of safety, but many of them fail to do so, which can result in catastrophic railway accidents. If this happened to you, you need a West Palm Beach railroad accident attorney by your side. Contact Pike & Lustig, LLP, to speak with lawyers knowledgeable in railroad accident litigation. Call at 561-291-8298.