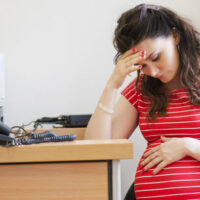 On February 3rd, 2020, the Equal Employment Opportunity Commission (EEOC) announced that Orlando Float, a massage therapy company based in Central Florida, has agreed to pay $27,000 to resolve a pregnancy discrimination lawsuit. According to the allegations, the business terminated a pregnant employee after she raised concerns about one of the company’s internal policies. Here, our employment lawyers in Miami provide an overview of the pregnancy discrimination settlement.

Allegations: Employee Did Want to Submit a Doctor’s Note, Was Immediately Terminated

The EEOC filed an employment discrimination lawsuit in a Florida court after initially failing to reach a pre-litigation settlement with Orlando Float. In its legal complaint, the EEOC contends that Orlando Float put a policy in place requiring all pregnant employees to obtain a note from their doctor before being permitted to work during the course of their pregnancy.

The specific employee in this case did not feel the need to obtain such a doctor’s note. She raised her concerns with her supervisor—stating that she felt fine to continue working during her pregnancy. When she showed up to work for her very next shift, she found that she was being fired for her failure to comply with the company’s policies.

Supreme Court: Pregnant Employee Can Choose if She Wants to Work

Federal law is clear on this point: Employers do not get to decide if a pregnant worker is “up to the job.” Indeed, they cannot legally require pregnant employees to obtain a doctor’s note before being allowed to work. Under the Pregnancy Discrimination Act (PDA), pregnant workers are entitled to the same treatment as other employees—meaning they have the right to be assessed on their specific ability to perform the job, not on an employer’s preconceptions or on general stereotypes.

Cases of this nature have recently made their way to the Supreme Court of the United States. In reviewing, the court has come down on the side of pregnant employees. Simply put, it is up to a pregnant woman if she wants to stay on the job. Her employer cannot make her get a doctor’s note. If she can perform the essential functions of the job with reasonable accommodations, then she is qualified to work.

To settle the pregnancy discrimination case, the employer agreed to pay its former employee $27,000 in damages. Additionally, the company also acknowledged that it will revamp its policies. No longer will pregnant employees be required to submit a doctor’s note. Finally, the human resources (HR) department will receive new training on pregnancy discrimination to ensure full compliance with all relevant state and federal laws.