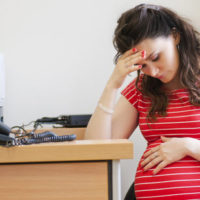 According to a press release from the Equal Employment Opportunity Commission (EEOC), two United States military contractors in North Florida are being sued for pregnancy discrimination. The EEOC claims that these companies (M2 Services Corporation and Day & Zimmermann Group) improperly forced a pregnant worker to take unpaid leave and then unlawfully fired her as a result of her condition. Here, our Miami employment law attorneys review the specific allegations against these contractors. Then, we explain some of the key things that companies and workers need to know about pregnancy discrimination claims in Florida.

M2 Services Corporation and the Day & Zimmermann Group provide aviation maintenance services to the United States military. Specifically, the companies work at the Naval Air Station in Jacksonville. When a female employee of these firms became pregnant, she immediately informed her employer of her condition. Her job was to clean aircraft parts, potentially exposing her to some hazardous materials. Upon learning of her pregnancy, the EEOC alleges that the companies required the worker to take unpaid leave against her will. She went on leave as was required by the firms. When she attempted to return to her previous position, she was terminated. On behalf of the pregnant employee, the EEOC is seeking:

In addition, the EEOC is requesting injunctive relief, the purpose of which is to ensure that reforms are made within these companies that will prevent any similar misconduct in the future. It should be noted that neither company has admitted to any wrongdoing.

Both employers and employees need to know that adverse employment action should not be taken against a worker simply because she is pregnant. Companies covered by the PDA and/or the FCRA cannot treat pregnant workers any differently than they treat non-pregnant workers who have similar skills and similar abilities. Pregnancy is a protected characteristic under these laws. Workers who have improperly faced adverse employment actions have important legal rights.

Get Help From Our Miami Employment Lawyers

At Pike & Lustig, LLP, our Miami employment law attorneys represent clients in all types of pregnancy discrimination claims. We represent both employers and employees. To find out more about our services, please contact us today. We represent clients all over South Florida, including in West Palm Beach, Fort Lauderdale, Hialeah, and Jupiter.

By Michael Pike and Daniel Lustig | Posted on February 8, 2019