How to Determine Liability in a Left-Turn Car Accident in Florida? 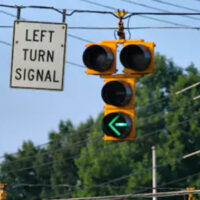 Many car owners in West Palm Beach and other parts of Florida tend to think that the driver of the vehicle turning left is always at fault. However, that is not the case in 100% of all left-turn car accidents in Florida.

We are going to discuss the circumstances that might affect liability and fault in a vehicle crash that involves a car turning left.

When is the Driver Turning Left at Fault?

Here are four hypothetical situations in which the driver of the left-turning vehicle would be deemed at fault in a left-turn car accident.

Under Florida Statute § 316.122, a car driver turning left at a solid green light must yield to any motorist approaching from the opposite direction that entered the intersection or is so close to it that it would be unable to stop in time to avoid a crash. For example, if another vehicle is approaching from the opposite direction and driving straight through the intersection, the driver of the vehicle turning left would be at-fault for the resulting collision.

Florida Statute § 316.075, meanwhile, requires the driver of the left-turning vehicle to yield to pedestrians and cars that are lawfully in the intersection. The driver must wait until the pedestrian in the crosswalk makes it across the street before executing a left turn.

Left-turning drivers are also prohibited from turning on a red light, though there are exceptions, which we will discuss below.

When is the Other Driver at Fault?

The motorist who goes straight through the intersection can be either partially or fully at-fault if he/she:

Is Driver Who Turns Left on Red Always at Fault?

Florida motorists are permitted to turn left on red under the following circumstances:

When it comes to gathering evidence to prove fault in a left-turn car accident, all of the following pieces of evidence can play a vital role in establishing the other driver’s fault:

Consult a West Palm Beach auto accident attorney if you have been in a left-turn car crash to help you establish responsibility and recover financial compensation from the at-fault motorist. Contact Pike & Lustig, LLP, to discuss your situation. Call at 561-291-8298.