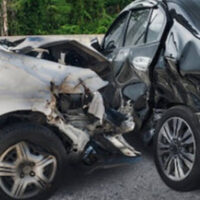 According to a report from ABC 25 WPBF, traffic in suburban West Palm Beach came to a standstill after two vehicles collided at the intersection of C Road and Southern Boulevard. One person was ejected from their vehicle in the car crash and immediately transported to a local hospital.

An aeromedical helicopter was dispatched to the scene, but was not used. At the time of publishing, no additional information was known regarding the severity of their injuries or the cause of the accident. The crash is still under investigation.

The National Highway Traffic Safety Administration (NHTSA) conducted a comprehensive investigation and review of nearly 5.9 million multi-vehicle crashes. According to the findings of the researchers, around 40 percent of multi-vehicle accidents happen at intersections. The evidence indicates that the overwhelming majority of intersection crashes happen because of driver error—meaning they could and should have been prevented with proper safety precautions. The NHTSA highlighted four specific types of motorist errors that contribute to intersection collisions:

Intersection Accident Liability in Florida: What You Should Know

Florida is among the minority of U.S. states with a well-developed no-fault insurance system. Under state regulations, motorists are obligated to carry at least $10,000 in Personal Injury Protection (PIP) coverage. Regardless of who caused the collision at an intersection, PIP coverage will apply after a minor or moderate collision.

Florida’s no-fault auto insurance regulations are sometimes misunderstood. State law does not always prevent injured car accident victims from filing a lawsuit. If you suffered a serious injury in a collision—defined as an injury that resulted in loss of important bodily function or permanent impairment—you can bring a fault-based claim directly against the negligent driver.

If you or your loved one suffered a serious injury in an intersection collision, you have a right to seek compensation for economic and non economic damage from the responsible driver. Depending on the severity of your injuries, you may be eligible to recover financial support for emergency medical care, other medical costs, rehabilitative treatment, lost wages, pain and suffering, disfigurement, and long-term disability.

At Pike & Lustig, LLP, our West Palm Beach auto accident attorneys are aggressive, diligent advocates for victims and their families. If you or your loved one was injured in a crash as at an intersection, we are here to help. Call us now for a no cost, no obligation consultation. From our office locations in West Palm Beach, Wellington and Miami, we represent injured victims throughout Southeast Florida.