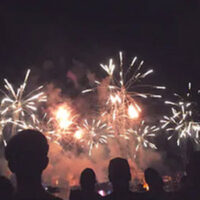 Parades have been called off, public gatherings prohibited, and fireworks have been shortened or cancelled altogether. It’s essentially feels like Independence Day has been cancelled this year. But this is the USA, and that means Americans will find ways to celebrate no matter the circumstances. Therefore, private, smaller gatherings with only close friends and family are more likely to be the norm this year. Cookouts, BBQs and other outdoor parties are naturally the safer way to celebrate the Fourth of July this year than assembling into the large crowds of closely packed people we’ve been accustomed to in the past.

However, just because public firework displays have been cancelled throughout Southern Florida, doesn’t mean we should expect to see a night sky without the rockets’ red glare. Reports show that sales of fireworks, sparklers and firecrackers are booming, up 115% from last year. But for all those noble citizens that decide to host an Independence Day event at their house, be cautious. July 4th and early into July 5th are known to be some of the busiest times for emergency room visits all year, and that is something party hosts should always keep in mind.

Homeowners may be found liable when a guest is injured from fireworks or other pyrotechnics set off during any summer gathering.  The case will depend on whether there was negligence on the part of the operator or host, and on the behavior of the guest who was injured. Investigations into the claim will need to analyze the injured party’s behavior before, during, and after the accident: Did they put themselves needlessly in harm’s way? Did they ignore warnings to stay a safe distance from the fireworks?

If it is determined that the claim is valid, paid damages are usually covered by the homeowner’s insurance policy. But that isn’t guaranteed.

This isn’t an easy claim because the use of ‘fireworks’ or ‘explosives’ could be excluded from a homeowner’s coverage, thereby exposing them to personal liability for the injuries and damages caused by their use. Policies may also have a large deductible that a homeowner is required to pay before the indemnification provisions are triggered. However, in any case, homeowners should be aware of their guests’ behavior and follow safety tips closely, or it will mean those bombs will be bursting their piggybanks.