The Deadly Dangers of Dump Trucks on Florida’s Roads 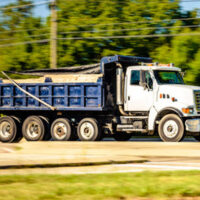 If you commute to and from work in West Palm Beach, you probably see dump trucks all the time. These gigantic vehicles are 20-30 times the weight and size of a regular car.

Naturally, when a dump truck collides with a smaller vehicle, the consequences can be catastrophic and even deadly to the occupants of the passenger car. Statistically speaking, nearly 70% of all truck accident deaths account for occupants of cars and other passenger vehicles.

Depending on the speed and type of impact in a crash with a dump truck, the other vehicle’s driver and passengers have a greater likelihood of sustaining life-threatening injuries or being killed.

This was evident in a fiery crash that recently occurred in western Palm Beach County. As reported by WPTV, a woman and her 1-month-old daughter were killed in an auto accident involving a dump truck.

As a result, the sedan became engulfed in flames and spun out of control. Both the female driver of the Impala and her 1-year-old baby died at the scene. The driver of the dump truck, who stopped and pulled over, was not hurt in the collision.

This was not the only dump truck accident in Florida in the past few days. TCPALM reported that around seven cars were involved in a crash involving a dump truck on State Road 60 in Indian River County.

The Dangers of a Dump Trucks on Florida’s Roads

Bringing a personal injury claim after a collision with a dump truck presents its own challenges. Often, the legal advice of a West Palm Beach truck accident attorney is needed to establish fault and pursue compensation.

Dump trucks are designed to transport materials related to construction, including but not limited to gravel, sand, and waste. Since dump trucks were built for off-road or construction site driving, they pose dangers to other vehicles on our roadways.

Not only do dump trucks create a deadly impact due to carrying heavy loads, but they also have their bumpers placed high, which means a standard vehicle may slide underneath the truck in a collision.

Although causes of truck crashes vary, there is a risk of tipping due to the drastic changes in weight and balance. A large percentage of dump truck accidents are caused by wide right turns. It can be challenging to maneuver a dump truck. To manage these wide right turns, the driver must swing the truck to the left first. However, swinging the vehicle to the left too far can cause it to veer into the adjacent lane or cross into opposing traffic, resulting in a devastating trucking accident.

When it comes to recovering damages following a dump truck collision, it is vital to establish who owns the vehicle (in some cases, local government or large construction companies own dump trucks), whether the truck was properly maintained, whether the driver violated any traffic rules, whether any federal trucking regulations were breached, whether fatigue played a role and many other factors.

Speak with a West Palm Beach truck accident attorney to get compensated after your dump truck collision. Contact our firm, Pike & Lustig, LLP, to discuss liability in your situation and gather the evidence needed to hold the at-fault parties accountable. Call at 561-291-8298 for a consultation.