Are Child Restraint Systems Required in Vehicles by Florida Laws? 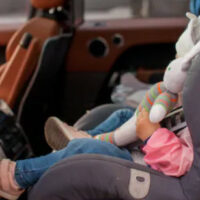 Many Floridian parents are confused about whether or not they must use child restraint systems when traveling with their kids. However, if you often travel in your car with children, it is time to put an end to the eternal debate: “Are Florida parents required to restrain their minor children when riding in a vehicle?”

The answer is: absolutely yes. Parents must do everything to keep their children safe when riding in cars, and child restraint systems are mandatory equipment for this purpose. Each year, there are approximately 130,000 children in vehicle crashes.

According to the Centers for Disease Control and Prevention, out of those auto accidents in 2018, nearly 18,600 resulted in possible injuries, more than 1,200 involved serious bodily injury, and 155 led to fatalities.

One such crash happened just recently in Polk County, Florida. According to FOX8, a 3-year-old child was killed in a hit-and-run collision on Interstate 4. The crash occurred at around 2 p.m. The child, who was unrestrained at the time of the accident, was one of six occupants of a vehicle.

The ages of other occupants were 7, 14, 17, 21, and 27. The vehicle was driven by a 21-year-old who lost control and rotated to the center median. Both vehicles were driving eastbound when the crash occurred. The unknown car, which changed lanes and collided with the back of the other vehicle, fled the scene.

The unrestrained 3-year-old child was killed, while all other passengers in the same vehicle were hospitalized with minor injuries. Note: Florida law allows victims of hit-and-run crashes to obtain compensation through the uninsured motorist coverage.

What Are Florida’s Child Restraint Laws?

But is the driver of the vehicle in which the unrestrained 3-year-old child was riding accountable for contributing to the death given that no child restraint systems were used?

Yes, that driver might be held accountable for the death because Florida law requires all children under five years of age to use a federally approved child restraint system. Florida’s child restraint laws are as follows:

What Are the Consequences of Not Using Child Restraint Systems in Florida?

However, those fines and license points are hardly the worst consequence of not using child safety system when driving with kids. By failing to use an appropriate and federally approved child restraint system, parents are placing their children at an increased risk of injury and death.

If your child suffered severe injuries while using a child safety system, you might be able to sue the manufacturer of the system for its defective or inherently dangerous design. Consult a West Palm Beach auto accident attorney to determine whether you have a product liability case. Contact Pike & Lustig, LLP, for a consultation. Call our offices at 561-291-8298.