Be Careful Of False ‘Made In America’ Claims 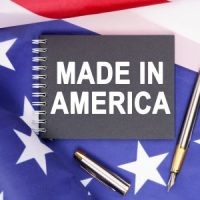 It seems like every day there is a new lawsuit related to false advertising or false claims. These lawsuits are a reminder to businesses to be careful what they say in advertising.

The recent controversy surrounds show maker New Balance and claims that it is “made in the USA,” a label that many consumers find to be appealing and that many manufacturers like to tour. It both makes their product more appealing, and some say, allows them to charge a bit more for the product they are selling. In fact, many studies and surveys have found that consumers are willing to pay more for products that are made in the United States.

But a class action lawsuit has been filed against New Balance, alleging that although they use the “Made in the USA” label, in fact, about a third of the shoe is made overseas.

Rule Limits Made in the USA Claims

The Federal Trade Commission has long had a rule that companies can only use “Made in the USA” if the product has no, or a very small amount of foreign products or content. This comes at a time when many companies are actually doing more manufacturing in the USA, given so many supply side delays that are holding up many foreign made goods.

New Balance did make a big deal of its domestically made shoes, saying that they have been made in the United States “for over 75 years.” The FTC tried suing New Balance for false claims, but the lawsuit was eventually dropped.

This new lawsuit, this time brought by consumers, is a bit different. The consumers aren’t arguing that there was a specific claim, or specific marketing that was deceptive. Rather, the lawsuit alleges that New Balance sells styles featuring the American Flag and its colors, with the word USA on the shoe, thus implying or suggesting to consumers that the shoe is made in America.

New Balance isn’t the only company to get in trouble for “Made in America” claims. A Bicycle company that relied on overseas internal parts ran into trouble for the slogan “Where America is Made,” and retailer Williams Sonoma also had to pay a fine of $1 million for falsely claiming its furniture was completely made in America.

The fines can also be steep – the government can penalize companies in the tens of thousands of dollars for every single falsely labeled product.

Certainly the government can’t go after every single product. But if your company is found boldly claiming it makes its products in the US, even if the FTC doesn’t penalize you, you could have a huge public relations problem on your hands.

Call the West Palm Beach business litigation attorneys at Pike & Lustig today to help your business in any kind of commercial litigation lawsuit.