Can You Be Sued For Discrimination On The Basis Of Sexual Orientation? 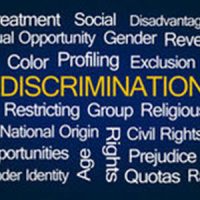 Most of us know that it is illegal to discriminate in the workplace based on gender, sex, race, religion, disability and a host of other factors. But what about gender identity, or sexuality? Can someone sue, saying they were fired, or that they weren’t hired, because they are LBGTQ?

The first thing to point out is the difference between discrimination based on sexuality in the workplace and sexual harassment lawsuits.

It remains illegal to harass, or to allow any employee to be harassed, or to create or allow an environment that permits someone to be harassed in the workplace. That prohibition applies to same-sex harassment. If you do it, or allow it, your business can be sued under federal and state sexual harassment laws, regardless of the gender or sex of either the harasser or the person harassed.

Discrimination on the Basis of Sexual Orientation

The Federal Department of Labor also passed a rule also back in 2014 prohibiting federal contractors from discriminating on the basis of sexual orientation or gender identity.

There are also some municipalities who have said that sexual orientation discrimination in the workplace is illegal (unlike some states, Florida does not have a statewide anti-discrimination law that protects the LGBQ workforce).

Not Every Firing is Illegal

The Supreme Court case only dealt with Title VII, which only applied to workplaces with more than 15 employees. Businesses with fewer employees are not bound by Title VII–but may still run afoul of city ordinances that prohibit businesses from discrimination in the workplace, which do not have the employee minimum the federal law does.

What Can’t You Do?

In implementing the Supreme Court case, the federal government has pointed out that illegal discrimination includes “customer preference” (that is, you can’t discriminate because your customers would “prefer” a straight employee), or forcing an employee to conform to typical heterosexual roles (it would, for example, be illegal to discriminate against a female employee for “acting too male”).

Despite the Supreme Court’s ruling, the law is still being challenged. Many states have filed suit, saying the case only prohibits firing someone because of their sexual orientation–the case does not, they contend, prohibit other adverse actions in the workplace on the basis of sexuality. There are also numerous freedom of religion cases, which allege a right to discriminate if it is part of an employer’s firmly held religious belief.

Call the West Palm Beach employment law attorneys at Pike & Lustig today to help fight against discrimination lawsuits, or to make sure you don’t get sued for discrimination.