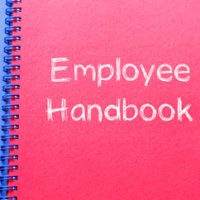 However, Florida is an at-will employment state—that means you can fire an employee whenever you want, for whatever reason you want. The two exceptions to this rule are (1) if the firing violates a federal law, such as anti-discrimination laws, or (2) if there is an employment contract.

A conflict often arises when employees have no employment contract—meaning you can fire them at will—and situations where the employee has signed an employee handbook.

Look at the Handbook

The first and easiest way is just to say in the handbook that it is not a contract and that it confers no contractual or legal rights on the employee. The handbook should specifically say that the employee remains an at-will employee.

Additionally, the handbook should say that it can be modified any time, for any reason, by the employer. This makes it different from a contract, which can’t be altered or amended at will by either party after it is agreed to.

You also may want to avoid terms that are so definite that they can be construed to confer tangible, enforceable rights. For example, saying that an employee must work “hours needed to finish the job as determined by the employer” may be OK. Saying the employee must work “40 hours every week, starting no earlier than 8am and ending no later than 7pm,” may be so definite that it transforms the handbook into a contract.

You should avoid putting things in the employee handbook that you may want to enforce the way you would a contract. For example, things like non-compete agreements or non-solicitation agreements can be mentioned in the manual—but the details should also be signed separately in a separate document by the employee.

Note that even if your handbook does not alter your right to fire an employee when you want, the terms of the handbook, if definitive enough, can still confer legally enforceable legal rights. So, for example, if the manual says that an employee will get a bonus for every 40 sales, you will have to give that bonus.

By Michael Pike and Daniel Lustig | Posted on February 2, 2022