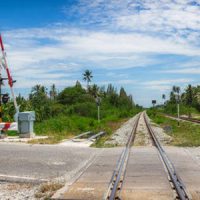 It’s been all over the news: train vs. car accidents. And guess what? The car never wins.

Brightline, the high-speed trains that zip between Miami, Ft. Lauderdale and West Palm Beach, spent millions to upgrade its safety systems and launch a public awareness campaign. But these accidents keep happening. Not just car accidents, but people dying as pedestrians as well. The Brightline even went so far as to release video footage hours after a camera on a high-speed train recorded a crash in Lake Worth Beach. The driver of the car was miraculously only injured but the impact cut his car in two. And he was one of the lucky ones.

The Sun Sentinel recently featured an editorial regarding the question on everyone’s mind: How much can and should government and business do to prevent people from making bad decisions? The Sentinel reports that every single incident involving a Brightline train was the fault of a car’s driver or a pedestrian. None of nearly 60 incidents, 50 of them fatal, since Brightline began test runs five years ago was the fault of the train operator or safety equipment at grade crossings.

According to the Sentinel, Brightline trains have been involved in the most crashes, and has drawn the most attention, because its trains are so much faster. Between Miami and West Palm Beach, Brightline’s 34 daily trains travel at 79 miles per hour and stop at one station in Fort Lauderdale. When service expands to Orlando, Brightline’s train speed will reach 125 miles per hour.

The National Highway Traffic Safety Administration (NHTSA), who mission is to save lives, prevent injuries, and reduce economic costs due to road traffic crashes, through education, research, safety standards, and enforcement, reports that “though highway-rail crossing incidents and fatalities declined dramatically for decades, the number of drivers going around lowered gates has increased in recent years.” And if you look at that video, that’s exactly what happened. This seems like a good time to go over the recommended steps for navigating train crossings from NHTSA:

As the Sentinel’s editorial concludes, “there’s no way to prevent every collision, short of radical change in human behavior. After every reasonable safety step has been taken, it’s up to the public.”