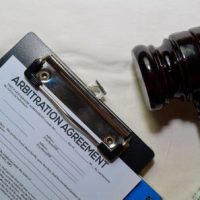 Whether it is a good idea or not to include an arbitration clause in your business contracts is an individual decision. You, along with your business law attorney, should consider your business, and weigh it against the pros and cons of arbitration, before making that decision.

But once you’ve made the decision to require arbitration in any lawsuits that you are involved in, comes the next step: how do you draft arbitration agreements that are enforceable?

As a general rule, arbitration agreements in contracts are enforceable. However, because arbitration cuts off a party’s right to access to a court, and the right to have a decision determined by  jury, they are looked upon with scrutiny by a court.

You can often expect the other side to your lawsuit, to challenge the arbitration agreement, especially if they are the ones suing you—claimants or Plaintiffs tend to disfavor arbitration.

All this means you need to have an arbitration agreement that is both legally binding, and one that works to your advantage.

The disclosure should say that someone may be giving up their right to a jury, although you don‘t have to give a detailed explanation of what arbitration is.

For online agreements, you may want to consider a separate checkbox or radio dial button, where the user acknowledges the arbitration clause.

Arbitration agreements where the costs are unequal, are prone to being struck down by a court. This is especially true where the parties may have an unequal ability to pay, such as an employee-employer lawsuit.

Imagine that a law says that the winning party under the given law, gets attorneys fees. But in your agreement, it says that each party will bear their own attorneys fees, no matter what the outcome of the case. Your arbitration has now taken away rights that someone would have under a federal law (specifically, the right to attorneys fees).

These provisions can subject an arbitration clause to being declared invalid. Try not to include any language that limits the rights someone would normally have under a contract or a law.