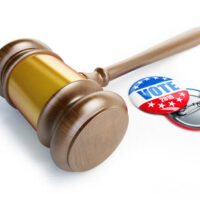 It is no secret that this election is unprecedented. Politics aside, the interest in voting early and voting by mail in the age of the coronavirus pandemic has changed the way we normally carry out our elections. As of today, over 60% of registered voters who voted in the 2016 election have already voted in the current election. However, many voters still want to vote traditionally – in person on election day, Tuesday, November 3rd – due to fears that their voices won’t be heard otherwise. Therefore, employers may receive more requests for voting leave than in prior years. To avoid confusion, Olgetree created an overview of state voting leave laws for employers that provides basic knowledge of voting leave rights in preparation of potential leave requests:

Although some states may not have specific voting leave laws, they may prohibit attempted influence or threats of discharge related to voting activity. For instance, although Connecticut, Florida, Idaho, Louisiana, Michigan, and Mississippi do not have specific voting leave laws, they more generally prohibit attempts to influence or prohibit employees’ voting, such as by threatening discharge or retaliation. Finally, North Dakota “encourages” employers to provide employees with time off to vote, but does not require them to do so.

Employers in a number of states are also required to provide employees with paid leave for the purpose of voting. In Alaska, employees who do not have at least two consecutive nonworking hours to vote may take off as much working time as will enable them to vote. In Minnesota, employees must be given paid time off for “the time necessary” to get to their polling place, vote, and return to work. In Nevada, employees must request voting leave before election day, and the amount of time that is considered “sufficient” is determined by the distance of the polling place from an employee’s worksite (1 hour for up to 2 miles; 2 hours for greater than 2 and up to 10 miles; and 3 hours for more than 10 miles). In Texas, employees may take paid time off to vote, unless the polls are open during two consecutive nonworking hours. Wyoming requires that one hour of paid leave be provided, not to include meal breaks, unless the polls are open for three or more consecutive nonworking hours.

Many states require up to two paid hours of leave for voting purposes, including California, Colorado, Illinois, Kansas, Maryland, Nebraska, New Mexico, New York, Oklahoma, South Dakota, and Utah. In addition to providing voting leave, California requires employers to post a notice of employees’ voting rights 10 days prior to an election. California also requires two working days’ notice from employees before taking leave. Colorado’s statute requires two hours of paid leave if employees provide advance notice and do not have three or more nonworking hours to vote when polls are open. Illinois and Nebraska also require that employees request leave in advance of elections. Paid leave is unavailable in New Mexico for employees whose workday begins two hours after polls open or ends three hours before polls close. Similarly, New York’s paid voting leave is not available to employees who have four consecutive nonworking hours while polls are open to vote. New York, like California, requires that employers post a notice of employees’ voting leave rights prior to election day, and also requires that employees request leave at least 2 days, but not more than 10 days, in advance.

Oklahoma’s and Utah’s voting leave entitlements are subject to advance request by employees and are unavailable to employees if polls are open three or more hours before or after their working hours.

By Michael Pike and Daniel Lustig | Posted on November 3, 2020