Employers Cannot Discriminate Against Employees on the Basis of Pregnancy 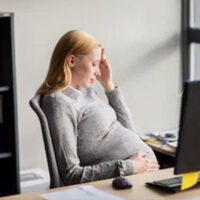 Employers naturally want their employees to be as productive as possible. They normally institute rules that prohibit employees from wasting time, goofing off, taking extra long bathroom breaks, or partaking in other activities while the employees are on the clock. Most employers wouldn’t figure that they can be sued for enforcing those rules.

At first glance, rules that restrict employees from seemingly wasting company time, seem perfectly legal. They are enforced equally upon all employees. These rules don’t discriminate based on race or religion or origin. And it makes sense that employees who are being paid, should be working while they are being paid. That is, until enforcement of those rules ends up unfairly discriminating against pregnant women.

Large online retailer Amazon is a good lesson in the unintended consequences of these kinds of rules, and how their enforcement can end up unfairly targeting pregnant women.

The problem is that pregnant women use the bathroom more often than their fellow male employees. In Amazon’s case, that meant that pregnant women ended up being less productive, and thus, being deprived of bonuses or benefits of productivity. The policy ended up in a lawsuit by a pregnant employee, who sued Amazon for pregnancy discrimination.

The employee alleged that she asked for additional time to use the restroom, and asked to work closer to the restroom, to save time going to and from the bathroom. Instead of accommodating her, the lawsuit alleged, Amazon fired her.

The policy is a great example of a policy that isn’t intended to be discriminatory, but which has a discriminatory effect. Employees can often institute rules that seem, on their face, to be fair to all, but which, when put into practice, can run afoul of federal discrimination laws.

And there are laws that specifically prohibit discriminating against pregnant women. Those laws also prohibit employers from requiring that pregnant employees stay home from work because they’re pregnant, and require that women who have had children, be allowed to return to work.

And laws such as the one in the Amazon case don’t just potentially violate pregnancy discrimination laws, but can also discriminate against the American’s With Disabilities Act (ADA).

Imagine a situation where an employee has Crohn’s disease, or some other ailment that requires the employee to use the restroom more often than other employees. Punishing that employee for using the restroom too often would be a violation of the ADA (although the ADA does require that employees who need accommodations because of disabilities, inform their employers of their needs).

Consult with our West Palm Beach employment law attorneys with questions, whether you are an employee or an employer. Let our lawyers at Pike & Lustig, LLP, help you. Call us at 561-291-8298 to get a consultation.