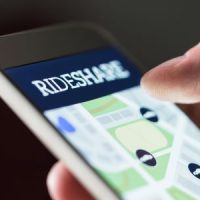 We’ve discussed what to do when your Uber driver, or other ride-sharing service, gets into an accident while you are a passenger. We advised that you should immediately have your physical condition assessed whether you feel injured or not. Even in a minor fender bender, it’s always important to seek medical assistance as you will need a medical report when filing a personal injury case. We recommended that you monitor your health in the upcoming days in the event that you have yet to experience the effects of the impact right away. Sadly, this situation is far more tragic than most ride sharing accident victim’s cases we’ve ever discussed.

In a devastating Uber car accident last year, generally called a ride hailing accident, a Massachusetts man was left paralyzed for life from the crash and is suing Uber for $63 million.

The 31-year-old victim of the ride sharing incident, William Good, says his driver had at least 20 driving citations and previously took a driver re-training course. His lawsuit argues that Uber was negligent in hiring the driver despite his “extensive” record.

As the Boston Globe reports, Good used Uber on April 30, 2021, to get a ride home from the restaurant where he worked, according to the complaint. His driver’s speed was “so fast as to be noticeably frightening” and the vehicle crashed into a parked car, the complaint says.

Good hit his head on the passenger seat’s headrest, slumped over, and “knew immediately he was paralyzed.” He spent two months in the ICU at Massachusetts General Hospital, followed by another two months in recovery at Spaulding Rehabilitation Hospital in Charlestown, MA. The injuries he sustained will leave him a quadriplegic for life.

The Uber driver’s record indeed shows at least 20 driving citations dating back to 1996, including some for failure to stop or yield, and he was previously required by the state to take a driver re-training course, according to the lawsuit.

The lawsuit states: “Uber knew or should have known that [the defendant] posed an unreasonable risk to riders in his vehicle, including Plaintiff Good, as well as other drivers, pedestrians and cyclists, given his extensive driving history and prior driver re-training. Under no circumstances should [he] have been hired as a professional driver by the Defendant Uber.”

As experience car accident attorneys, this is an on-going case that we will be following closely.

By Michael Pike and Daniel Lustig | Posted on February 1, 2022