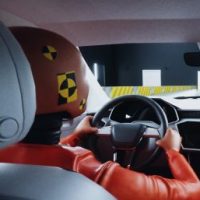 Every now and then, you see news reports with information about the safety ratings for cars. In these reports, you often see cars in a sterile and controlled environment being smashed in a number of ways. And inside those cars are fake humans—dummies.

History of the Dummy

You may already know that those dummies are there to simulate a human, and the impact of given collisions on the human body. But what you may not know is how complex these machines are—and what their weaknesses as information tools may be.

Researchers used to use actual dead bodies, until morals and public outcry stopped that practice. The same with live animals, which were used, until we realized the ethics (or lack thereof) of that practice. At some point, researchers themselves sat in crash tests, subjecting themselves to accidents.

But today’s dummies are highly advanced technological devices—they are not just department store mannequins or stuffed dummies. They transmit data on the forces that are exerted on the dummy, meaning they must be loaded with sensors and technology, but they also must be soft, and weighted accurately enough to replicate the human body.

Not all dummies are the same; some are designed to measure front end impacts, some for rear impacts, and some for the impact of collisions on minors and children. It can take many years to make, develop and design a dummy for a new body type, shape, or purpose.

Is an Update Needed?

Today we are realizing that our dummies may be in need of an upgrade, because science is telling us that females are getting injured and dying in car accidents at a much higher rate than males are-by some estimates, women suffer fatalities at a 70% higher rate than men do (these studies equalized for safety features in vehicles).

We don’t know why, but researchers speculate that the shape of a woman’s body, such as hips, and distribution of fat that is different on a woman’s body than a man’s may impact how the female body absorbs impact in a car accident.

That’s telling us that our dummies may not be transmitting data that is accurate to the female body. We do have some female crash dummies, but many are made for the tiniest framed women. This was done purposely, as it was believed that if a smaller woman could survive a crash, so could a larger woman, so why design a larger dummy to model a larger framed woman? But we now are realizing this logic may not hold.

New models may be a way off; aside from the time to develop and the cost to develop new models, when one is developed, the data needs to be correlated to see how accurate and reliable the new dummy actually is. That means that for some time, women may continue to be underrepresented in crash test data.

Call the West Palm Beach personal injury attorneys at Pike & Lustig today if you have been injured in a car accident.