Hold Harmless Agreements And Liability Waivers: Are They Enforceable? 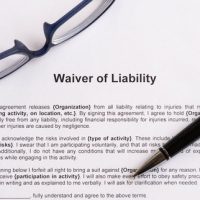 When you engage in certain kinds of activities, especially athletic events, gyms, or amusement parks, you may notice that when you walk in, and as a condition of entering a business, you are forced to sign a hold harmless document, or a document that contains an exculpatory clause. But what is this document, is it enforceable, and can it prevent you from filing a personal injury case if you’re injured?

An exculpatory clause, sometimes called a hold harmless, is your agreement that you will not and legally cannot sue someone else, if you are injured on their property. You are waiving your right to sue and ultimately collect damages.

Hold harmless agreements are generally enforceable, and Florida courts do recognize them as being legally binding. But just because you may have signed one, doesn’t mean you absolutely cannot sue if you were injured, as there are a number of exceptions and ways around a hold harmless agreement.

A hold harmless agreement is like any other contract—the words that are used in the contract matter.

Often, a hold harmless will require that you waive any claim for any injury that is “inherent” in the activity.

Minors present special problems. Some courts have held that only a child’s legal guardian can waive the rights of a minor—not another relative or a friend. This often happens when a parent takes a child’s friends to an amusement park together.

Ambiguity can create problems for enforcement. Ambiguity, or vagueness, is when the terms of an agreement are not clear, or when they are subject to differing meanings. A document can also internally contradict, meaning that two parts of the same agreement can be read in different and conflicting ways.

If you signed a waiver of liability, and were injured on someone else’s property, you should not give up. An attorney can read the agreement, see if it applies to you, and see if there is an argument that the agreement should not be enforceable, which would allow you to pursue your injury lawsuit.

Don’t analyze your case on your own. Let us help. Call the West Palm Beach personal injury attorneys at Pike & Lustig today.

By Michael Pike and Daniel Lustig | Posted on September 19, 2022