How Does Arbitration Work in Business Litigation in Florida? 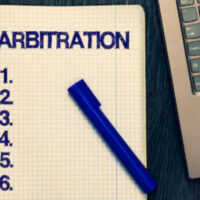 Many businesses choose to include arbitration clauses when signing a contract with other parties. Arbitration is a private process in which disputing parties agree that an arbitrator can settle their dispute after hearing arguments and reviewing evidence.

Unlike in mediation, the neutral arbitrator in arbitration has the authority to make decisions about the dispute. The arbitration process in Florida resembles that of a trial because parties have to make opening statements and present their evidence.

However, arbitration tends to be less formal, not as costly, and can usually be completed more quickly than traditional business litigation trials.

What Goes into the Arbitration Process in Florida?

The process of arbitration consists of four phases:

Once the arbitration process is initiated – either voluntarily or through contractual obligation – the parties may need to agree on various aspects of the procedure, including:

The ability to select a neutral arbitrator is considered one of the greatest benefits of the arbitration process. When choosing the neutral arbitrator, look for someone who is knowledgeable about the subject matter in your dispute to ensure a fair judgment.

Arbitrators can be selected from a pre-approved list of candidates. After the selection, a preliminary hearing will be held to complete the procedural elements of the arbitration process to determine whether evidence and witnesses can be included in the hearing.

Prior to the hearing, there may be a discovery period where all parties involved in the dispute will have to share their evidence with the opposing party. The rules of the discovery period will depend on the arbitration agreement.

After the hearing, the arbitrator or a tribunal of arbitrators will have to make their final decision. In some cases, attorneys may be allowed to submit post-hearing documentation to supplement their arguments and evidence presented during the arbitration hearing.

Once the arbitration hearing is complete and parties have offered their post-hearing documentation, the arbitrator will issue a decision and determine the award. Unlike mediation, any decision rendered by the arbitrators is binding with very limited recourse for appeal.

In other words, after the arbitrators’ decision, the disputing parties will be required by law to adhere to the terms of that decision. However, the courts will review the case to make sure that no fraud or misconduct was present during the hearing.

If you are considering arbitration to put an end to your dispute with another party, consult with our West Palm Beach business litigation attorneys at Pike & Lustig, LLP. Call at 561-291-8298 to discuss your legal options.