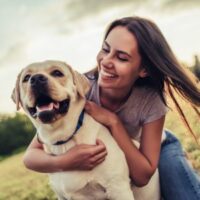 According to the American Pet Products Association’s 2019-2020 Pet Owners Survey, about 63 million households across the United States own at least one dog. The American Veterinary Medical Association reports that with an estimated population of nearly 85 million dogs living in U.S. households, millions of people—most of them children—are bitten by dogs every year. The Insurance Information Institute reported that in 2020, insurance companies paid $853.7 million for 16,991 dog bite and injury claims. So how does dog ownership affect insurance policies?

On average, typically homeowners and renters insurance policies cover dog bite liability legal expenses, up to the liability limits (usually $100,000 to $300,000). The dog owner is then responsible for all damages exceeding that amount. According to the Insurance Information Institute however, some insurers are taking steps to limit their exposure to losses due to dog ownership claims. Certain companies require dog owners to sign liability waivers for dog bites, while some insurance companies will not insure homeowners who own certain breeds of dogs categorized as “dangerous,” such as pit bulls and Rottweilers. There are even some insurance companies that do not offer insurance to dog owners of those kinds of breeds at all. Furthermore, there are cases in which an insurance company will cover a pet only if the owner has taken the dog to classes aimed at modifying its behavior, or if the dog is restrained with a muzzle, chain or cage.

Other insurance providers decide whether to insure a dog-owning household on a case-by-case basis, depending on whether an individual dog – regardless of its breed or history – has been deemed “vicious.” They don’t require the breed of a dog owned when writing or renewing homeowners insurance and do not track the percentage of specific types of dog breeds’ involvement in dog bite incidents. However, if and when a dog has bitten someone, insurers see this as a greater risk and may charge a higher premium, nonrenew the homeowner’s insurance policy or exclude the dog from coverage.

Homeowners insurance liability claims by the numbers, from the Insurance Information Institute: