How to Establish Fault in LCM Accident? Improper Lane Changes or Merging in Florida 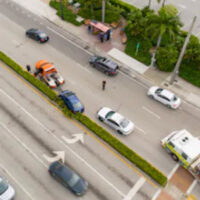 The U.S. Department of Transportation estimates that lane change/merge (LCM) crashes constitute nearly 5% of all police-reported auto accidents in Florida and other parts of the nation.

Although the vast majority of these collisions result in only property damage, they can also cause catastrophic and life-threatening injuries. If you are wondering, “Who is responsible in my LCM accident?” discuss your case with our West Palm Beach motorcycle accident attorney from Pike & Lustig, LLP.

Despite improper lane changes and merges causing only property damage in more than 80% of LCM crashes, a recent motorcycle accident in Gulfport, Florida, showed that these collisions could potentially become the basis for a personal injury claim.

Gulfport Police Chief Robert Vincent sustained multiple injuries in a motorcycle crash on I-275 after another vehicle attempted to merge where the police chief was riding his motorcycle.

According to The Gabber, Vincent was participating in the Heroes Weekend volleyball tournament on Gulfport Beach prior to the collision. As a result of the crash, the Gulfport Police Chief suffered a broken collar bone, a partially collapsed lung, and three broken ribs.

Vincent, who received surgery on his collar bone, told the publication that he was riding his bike on the exit ramp for 118th Avenue on I-275 when a car driver attempted to merge into his lane.

Notably, the accident occurred at the time of construction on the road, so the lane markings were changed, and this was “a bit confusing,” according to the police chief. “It goes down from three lanes to one at one point,” he told The Gabber. The LCM crash is being investigated as a possible DUI.

How to Determine Fault in a Lane Change/Merge Accident?

Regardless of whether you are driving on the four-lane highway or transitioning from a three-lane to a two-lane road, merging requires the motorist’s patience and awareness.

Proving fault in crashes caused by improper merging or lane changes can be difficult because it is not immediately clear who had the right of way. However, it is critical to establish liability in an LCM accident if the injured party decides to recover damages from the other driver because Florida is a no-fault state.

Contact the West Palm Beach personal injury attorneys at Pike & Lustig, LLP, to determine fault in your case. Call at 561-291-8298 or fill out our contact form today.