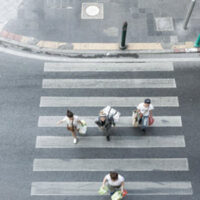 Many people may be surprised to learn that “jaywalking” is not an actual legal term. Florida, in fact, has no “jaywalking” laws. The word doesn’t even exist in any of the Florida statutes. So where did this odd term even come from?

In the early twentieth century, “Jay” was pejorative slang for someone from the country who doesn’t understand the ways of the big city. It was basically another term for “rube,” used by many city dwellers to refer to non-city folk as stupid, slow or naïve. In 1909, the word “jaywalker” first appeared in the Chicago Tribune. The term is actually a made-up word coined by local auto clubs and dealers as an attempt to redefine Chicago streets as places where pedestrians do not belong by using the term in a derogatory manner. Automotive companies created propaganda campaigns to put discourage pedestrians who walked in the streets and crossed them whenever and wherever they wished as they had done for centuries before the automobile became popular.

Now, we still call it “jaywalking,” but specifically when people are not walking in a crosswalk (when there is one) and following the appropriate signals. While egregious violations of pedestrian laws such as crossing a street against a red light are extremely illegal, actions like crossing mid-block are not illegal in most places.

At cross streets, the law says drivers must yield the right of way to any pedestrian in both marked and unmarked crosswalks at the intersection. It also states that pedestrians may not cross “between adjacent intersections at which traffic control signals are in operation.” So, you can’t cross if you’re between two intersections and both have traffic signals, but if one of those intersections does not have a traffic signal, then pedestrians are allowed to cross, as long as you yield to approaching vehicles. Generally, pedestrian traffic rules require that pedestrians yield to motorists any time they are outside of a crosswalk, but that doesn’t mean you can’t cross mid-street when they pass by. Pedestrian laws forbid walking in the street when a sidewalk is available or crossing when there’s a signal that says “DO NOT WALK,” which are usually referred to as jaywalking laws, but they are not, in fact called that at all.