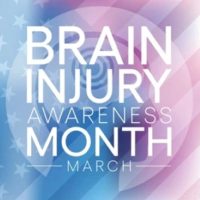 For more than three decades, the Brain Injury Association of America (BIAA) has been observing Brain Injury Awareness Month. By conducting an engaging public awareness campaign in March of each year, the goals are:

A traumatic brain injury (TBI) is defined as an alteration in brain function, or other evidence of brain pathology, caused by an external force. Traumatic impact injuries can be defined as closed (or non-penetrating) or open (penetrating). Examples of a TBI include:

If you have been in a car accident, you may not realize you have a brain injury right away. Therefore, it is important to look out for the symptoms. According to the Mayo Clinic:

Traumatic brain injury can have wide-ranging physical and psychological effects. Some signs or symptoms may appear immediately after the traumatic event, while others may appear days or weeks later.

The signs and symptoms of mild traumatic brain injury may include:

Moderate to severe traumatic brain injuries can include any of the signs and symptoms of mild injury, as well as these symptoms that may appear within the first hours to days after a head injury:

Because the severity of a head injury may be unclear immediately after a car accident, all such injuries should be treated seriously. That is why it is imperative that you seek medical help right away, and don’t leave anyone who may have suffered a blow to their head unmonitored.

Car accidents, workplace accidents, and serious falls are common examples of situations where you may be able to sue for a brain injury if someone else was partially at fault for your injury. In the cases of a car or workplace accident or a slip-and-fall, the lawsuit would be a personal injury claim against another person or persons. You may be entitled to compensation for damages including medical bills, lost wages, and pain & suffering. This is why you should contact an experienced personal injury lawyer. Auto accident attorneys know exactly what to do, giving you time for yourself to recover from your ordeal.