Negligence Per Se And Breaking The Law 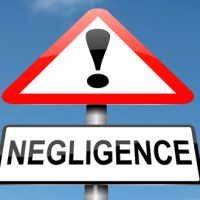 When someone injures us, or when we want to sue them for negligence, we often say that they “broke the law.” But that’s not technically true.

Laws are what are written in the legal books; they are codes and rules and regulations that are written by the government. Certainly, laws have to be followed. But contrary to popular belief, someone doesn’t have to actually break the law to be negligent or to owe a victim compensation for negligence.

Negligence and The Law

There is no law that tells a store owner how to stock inventory on their shelves. But you know that if a store were to haphazardly pile too many goods on a high shelf in a careless manner, and those goods fell on you and injured you, you would be allowed to sue for compensation for your injuries.

There is no law that says that a golf cart has to stay on a golf course. But you know that if someone took that golf cart off the golf course and injured you, you would be allowed to sue for your injuries.

There is no law that says that a business has to have a defibrillator, or a certain number of defibrillators. But if you have a loved one that has a cardiac event and passes away on a premises, you could sue the premises for not having defibrillators on site.

The moral of the story is that negligence, and who owes you compensation for your injuries, is not based on written law—it is based on what a reasonably prudent and safe person would or would not have done in the same situation.

When a Law is Broken

Of course, sometimes someone does violate a written law. For example, a truck driver may be driving more hours than they are legally allowed to drive, and then they cause an accident.

When that happens, it is called negligence per se. Think of negligence per se as “automatic negligence.” When there is a written law that is broken that causes you injury, you no longer need to prove that the other side (the defendant) did anything wrong. You don’t have to show the defendant should have done something or failed to do something else. All you need to show is that the law was broken, and that it caused you injury.

This allows you to bypass a very difficult part of a personal injury case. It establishes a presumption (or assumption) that the defendant was negligent, from the minute you start your case. That’s why, even if you don’t need to show that an established written law was broken, it often can help your case to show that this was the case.

By Michael Pike and Daniel Lustig | Posted on January 9, 2023