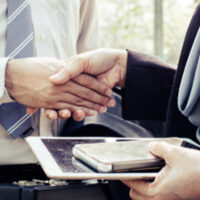 SolarCity was founded back in 2006. The Fremont, CA based company marketed, sold, and installed solar panels to both residential and commercial customers. Notably, the company was founded by  Peter Rive and Lyndon Rive—cousins of Tesla CEO Elon Musk. As noted previously, Mr. Musk was also the Chairman of SolarCity prior to the Tesla acquisition. SolarCity faced some significant financial challenges.

Tesla Acquired SolarCity for $2.6 Billion—Not All Shareholders Were Happy

In 2016, the company cut its workforce by approximately 20 percent, laying out nearly 2,000 employees. In August of 2016, Tesla announced its proposed acquisition of SolarCity at a cost of $2.6 billion, in an all-stock transaction. Almost immediately, some Tesla shareholders raised complaints. They argued that Tesla dramatically overpaid for SolarCity and that Mr. Musk and other members of the board had a conflict of interest.

Tesla CEO Elon Musk testified in a Delaware court because he refused to settle the shareholder derivative lawsuit. The key question at stake in the trial is whether or not Mr. Musk acted in the best interests of Tesla (and its shareholders) in the acquisition of SolarCity or whether he put his personal financial interests ahead of the company. As reported by CNBC, Mr. Musk declared that he did not gain personally from the transaction. Further, he states that he did not direct the Board of Tesla to make the SolarCity acquisition. The shareholder derivative trial is expected to last for around two weeks.

At Pike & Lustig, LLP, our Florida business litigation attorneys have extensive experience handling shareholder disputes. If you have any questions about your legal rights, we are more than ready to get started on your case. Give us a call now for a confidential consultation with a top-rated lawyer. From our offices in West Palm Beach, Miami, and Palm Beach Gardens, our law firm handles shareholder disputes all around the region.