The Basics Of Defamation Law 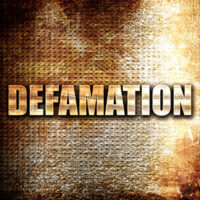 If you say anything negative about somebody, you’re certain to get a threat of being sued for defamation or slander. It seems more people threaten defamation, than actually know what it is. Regardless of whether you’re the one being defamed, or you’re trying to prevent getting in trouble for defaming someone else, a quick primer on the law of defamation may be helpful.

Defamation is a false statement of fact about someone, published to a third party. The first part of defamation is obvious—it must be a false statement of fact. An opinion is not defamation, unless it’s couched in terms of a fact (“I believe that guy stole money,” or “In my honest opinion, he’s being sued for a lot of money” are not opinions, even though they sound like they are).

The statement of fact must be false. Truth is an absolute defense to any defamation lawsuit. That means that no matter how bad what you’re saying may be, if it’s true, it’s protected.

Publication requires that the statement that is made be told to someone else. I cannot say something to someone about that same person, and be liable for defamation. My statement has to be told to, or heard by other people for there to be a defamation action.

There is even implied defamation, which doesn’t require an actual verbal or written statement of fact, so long as the communication conveys a falsity. If I superimposed someone’s face in a picture of drug dealers, and said nothing else, that could be enough for implied defamation.

You may be wondering what damages are for a defamation claim. In Florida, some statements are so bad that the damages are assumed. These include statements that someone committed a felony, that they have a disease (usually a serious or, as the law calls it, a “loathsome” disease), that they have characteristics unfit for business, or, for a woman, that she is promiscuous.

But even when they are not assumed, damages can include any injury that flowed from the defamation For example, if you were fired from work because of something someone said, you could sue for damages. Even mental anguish or emotional trauma can be recovered. Imagine an example where someone wrongfully told your wife you were cheating on her, and she left you. You would certainly have a valid claim for emotional damages.

Public officials will have a harder time suing for defamation, because they are, by nature, subject to scrutiny.

Protect your reputation and your business. Call the West Palm Beach commercial litigation lawyers at Pike & Lustig for help if you have a claim, or need help defending any kind of claim brought against you.