What Is A Letter Of Intent And Is It Enforceable? 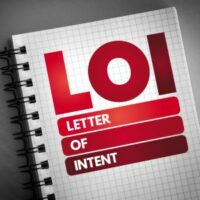 In law and business, agreements to agree are more common than you may think. It may seem silly to have an agreement to agree on something later on—after all, how do you know what you will or won’t agree to later on, until you actually see what you are going to be asked to agree upon?

But agreements to agree—sometimes more commonly known as letters of intent (LOI)—are quite common.

Letters of Intent and Their Requirements

Because LOIs are really agreements to agree on terms that have not even been discussed yet, they are usually not legally binding or enforceable.

LOIs can set out how parties will act in determining whether or not to agree. For example, the LOI may set forth what information will be shared between parties, or timelines that must be met between the parties while exploring whether or not they want to agree later on.

The question of whether a LOI is enforceable, and thus whether someone can be sued for breaching the terms of the LOI, is whether the LOI is specific or definite.

If specific enough, parties can be sued for breaches of the LOI. However, if the LOI only says that the parties will agree to things later on, it is not enforceable.

LOIs can be binding, even though a later agreement is contemplated, so long as the LOI itself is specific and clear, and expresses an intention by the parties to be bound by the LOI.

Whether you want to be bound by the LOI is up to you, if you are the drafting party. The key is understanding that the more definite and specific your LOI is, the more likely it will be interpreted to be binding. This is why you want to avoid standard forms found on the internet, when drafting LOIs.

By Michael Pike and Daniel Lustig | Posted on August 3, 2021