What Is Accord And Satisfaction? 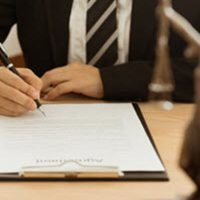 Let’s say that someone owes you money. They agree to that. What they don’t agree to, is how much they owe. They send to you the part of the debt that they feel is legitimate and owed. You, of course, take what they have offered, and you prepare to file a lawsuit to collect the additional, disputed amount.

Did You Make a Mistake Accepting Money?

What you may not be aware of is that by accepting that partial payment, you could have waived your right to ever collect anything more on that debt. That’s called accord and satisfaction.

The question a court will ask is when you took that partial payment, was it really a partial payment? Or was it intended to be a full settlement of a disputed amount that you, by depositing or accepting the money, agreed to?

The first step is somewhat obvious: don’t ignore the words that come with offers of payment. If someone sends you money with a writing that says the money is being sent “to settle” all claims, or “in satisfaction” or “in resolution” of a disputed claim, and you take the money, a court likely will say that no more money is owed.

This includes notations on checks that say “payment in full.” In some cases, courts have not held accord and satisfaction, where a creditor scratches out language like “payment in full” that is on a check or other writing, but that’s not a situation that you want to be in if you are the creditor.

With today’s forms of e-payments, like Venmo, Zelle or Paypal or other online mediums, it is especially important to check notations that these portals allow to be made along with payments.

The statements of satisfaction must be given to you before, or at, the time the money is tendered to you-not afterward. There also has to be some writing or indication that the parties intended to settle a larger debt, by payment of the lesser debt.

So what do you do if you are tendered money that says, either on the check, or with an accompanying note, that the payment is in full satisfaction of all claims? The answer is not to accept the funds at all. If the other side truly wants to make a payment of amounts that are undisputed, they will have to re-tender the funds, or withdraw their note, that claims accord and satisfaction.

Accord and satisfaction doesn’t just happen with the tender of actual money.

Imagine a situation where party 1 owes money to party 2, and party 1 says “instead of payment, I will fix your roof.” If party 2 does nothing and allows the roof to be fixed, the court could find that the superseding new contract to fix the roof in return for forgiveness of moneys owed, Is a valid accord and satisfaction.

By Michael Pike and Daniel Lustig | Posted on October 6, 2021