What You Need to Know About Dog Bites 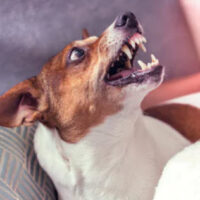 “Dog owner’s liability for damages to persons bitten.—The owner of any dog that bites any person while such person is on or in a public place, or lawfully on or in a private place, including the property of the owner of the dog, is liable for damages suffered by persons bitten, regardless of the former viciousness of the dog or the owners’ knowledge of such viciousness. However, any negligence on the part of the person bitten that is a proximate cause of the biting incident reduces the liability of the owner of the dog by the percentage that the bitten person’s negligence contributed to the biting incident. A person is lawfully upon private property of such owner within the meaning of this act when the person is on such property in the performance of any duty imposed upon him or her by the laws of this state or by the laws or postal regulations of the United States, or when the person is on such property upon invitation, expressed or implied, of the owner. However, the owner is not liable, except as to a person under the age of 6, or unless the damages are proximately caused by a negligent act or omission of the owner, if at the time of any such injury the owner had displayed in a prominent place on his or her premises a sign easily readable including the words “Bad Dog.” The remedy provided by this section is in addition to and cumulative with any other remedy provided by statute or common law.”

Florida is a “strict liability” state which means a Florida dog owner may be held liable if their dog bites someone, even if it’s the first time the dog has ever lashed out. Section 767.04 specifically states that the dog owner is “liable for damages suffered by persons bitten, regardless of the former viciousness of the dog or the owners’ knowledge of such viciousness.”

However, there are three potential defenses to a dog bite claim:

*You should be aware that such a sign won’t protect an owner if the dog bite victim is under six years of age, or if the owner was negligent in connection with the incident.