When Is Someone A Third Party Beneficiary? 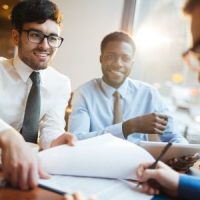 But there are certain times when someone who has nothing to do with a contract and who never signed or agreed to the contract can sue when the contract is breached. This seems impossible—but it’s not.

When is Someone a Third Party Beneficiary?

Often, parties can sign a contract that benefits someone else, who is not a party to the contract. That “non-party” is called a third party beneficiary. Because the beneficiary is deriving a benefit of the contract, and has lost something when the contract is breached, the third party has standing to sue.

Not everybody is a third party beneficiary—in order to be able to sue when you haven’t signed a contract, the beneficiary must meet certain criteria:

A court will often ask whether the parties that did contract intended to give the third party the right to sue if the contract is breached. Sometimes, that right has to be expressly or clearly expressed in the contract.

The third party beneficiary must be a clear intended beneficiary; someone who just happens to receive some tangential or side benefit will not be considered a beneficiary to a contract.

Often, contracts may have indemnification agreements, where someone agrees to indemnify a party, as well as that party’s successors, beneficiaries, or subsidiary companies. All those companies are third party beneficiaries—even though they didn’t all sign the contract.

If parties want to make sure that someone cannot enforce a contract, they should specifically say in their business contracts that a particular person or company is not an intended third party beneficiary with the ability to sue.

Call the West Palm Beach business litigation attorneys at Pike & Lustig today for help with your business contracts and agreements.