Who Is Signing Your Arbitration Agreements? 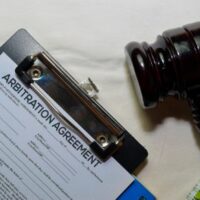 An arbitration clause can have real benefits for a business. They are included in many different kinds of contracts, and many businesses find these clauses helpful in limiting potential liability.

Arbitration clauses can do a number of things such as:

Of course, some of these positives can potentially be negatives depending on who you are, who you are suing, and whether you’re a Plaintiff or Defendant. But if you do choose to add an arbitration agreement, you should be mindful of who is signing it.

Arbitration agreements are enforceable, so long as they are properly drafted. Many companies put a lot of time and effort into drafting arbitration provisions that will be legally enforceable. A few wrong words here or there, and an otherwise enforceable agreement can become unenforceable.

But many businesses give little thought to who can sign and bind the other party to an arbitration agreement. A recent case shed some light on this very question. Although the case was an injury lawsuit, and involved an adult signing for a child, the case is still helpful for businesses to understand who has legal capacity to bind someone else to an arbitration agreement.

There are certain people that can’t sign an arbitration agreement (or bind themselves to any kind of contract). These may include minors, people who are mentally incapacitated, or people who may have serious mental disabilities.

Children will, of course, have parents who are able to sign, but in the most recent case, it was not a parent who signed, but an adult friend. The court asked whether or not an adult friend can bind a minor to the arbitration agreement.

The Court said no, only a parent can legally bind a child to a contract, and as such, the contract that included the arbitration agreement was void.

There is one doctrine that could have made this provision enforceable: apparent authority. That would be where someone holds themselves out as someone else’s guardian or parent. A business is entitled to rely on apparent authority.

However, in the case, that argument was never made by the business, and as such, the court didn’t rule on it.

Apparent authority may end up to be a way to enforce agreements that aren’t signed by a child’s parents, or someone’s guardian. But instead of testing that theory, it’s always best for businesses to have some way to verify that whoever is signing on behalf of someone else has the legal authority to do so.