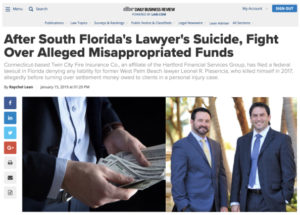 Connecticut-based Twin City Fire Insurance Co., an affiliate of the Hartford Financial Services Group, has filed a federal lawsuit in Florida denying any liability for former West Palm Beach lawyer Leonel R. Plasencia, who killed himself in 2017, allegedly before turning over settlement money owed to clients in a personal injury case.

Michael J. Pike and Daniel Lustig of Pike & Lustig in West Palm Beach represent the Cantinellas, and said they disagree with Twin City, but aren’t surprised to see it fighting the payment.

“Insurance carriers do not want to pay claims, especially claims on behalf of lawyers who are now deceased and no longer paying their premiums,” Pike said. ”Now that Mr. Plasencia cannot speak from the grave, the insurance carrier is going to attempt to utilize that to its advantage in an effort to spin away coverage.”

In Lustig’s view, it’s disheartening that his clients are still uncompensated for an accident that resulted in 16 surgeries for Michael Cantinella.

“[Our clients] felt that they were running against a brick wall because they didn’t know what to do after they discovered there would be no compensation for their injuries,” Lustig said. “They were taken advantage of.”